Join Sandra Venneri of Nutrition Bites every evening at 9pm for 30 days while she shares with you topics on home economics and being a Professional Home Economist.

I was invited to participate in the Arts & Cookery Bank’s Food Fight this summer when I poked my head into their amazing heritage and social enterprise site in West Lorne, ON. (See my previous post on the tour I received.)

It was really a push outside my box.  Not the black box that contained the secret ingredients.  The comfort zone I had remained in.  I was asked by Coupons for Hunger to compete in a salsa competition at the Covent Garden Market the previous year.  Being a single mom, I turned down the opportunity. I usually never back down from a challenge, but after a few years of not fitting myself into any specific niche or exact career in food and nutrition, I had less than optimal confidence at the time.   It was a regret I had – I could have taken the girls along (they love these sorts of things!

So, I said yes this time.  I truly believe that everything happens for a reason, and when given second chances – TAKE THEM!  Out of my shy box and into the black box I dove!

The experience was a whirlwind.  Days leading up to the anxiety increased: Would my product flop? Would my friend bail on me at the last minute?  Would I embarrass myself in front of the judges including Emily Richards, fellow P.H.Ec.?

But honestly the day came, and I was happy to just do it.  I was conquering my fears of failure and doing what I normally do: give it my best effort and have fun.  It’s not like I was doing brain surgery and someone’s life was at stake!  It was just food. And I love food, cooking and adventures! So what’s the worst that could happen? I was going to get messy and lose.  Ah well, I’ve had worse happen to me. And wasn’t West Lorne far away from London and Niagara – who would know? Except maybe my twitter followers because I tweeted it.  But who really follows me anyways? But if you are looking, you can follow me here 😉

So we got to the place around 6:40pm.  The first of that round of teams to arrive.  We grabbed a few pics to remember our experience.  We waited, and tried to figure out any hints.  We discussed options based on what we knew:

7 pm came and we were allowed to enter the kitchen.

But then we walked in, donned our aprons and each team was given a different black box – so no cheating off others’ ideas! We were allowed to use other ingredients around the Cookery Kitchen – onions, garlic, peppers, gooseberries, strawberries, fresh herbs, carrots, tomatoes.

I opened up the box and we had:

I got so excited and my friend was less than impressed.  I used those ingredients all the time, her hardly ever!

We were also told we had to make an edible paste and 4 litres of the product!  What???!!! They told us they didn’t want a jam.  It had to spread using a knife, not a spoon.  Oh my!!!  This threw I think all three teams for a loop.  Oh and did I mention we had 3 hours to complete the entire task – ideas to product completed and in jars!? Glad I’m an energetic person that is a “planner” and very organized.

So we came up with a plan to do roasted peppers and make a chutney-like spread.  We asked the other teams if we could take all the 10-12 peppers in the basket. They were good with that and so away we went. 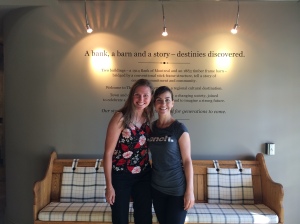 Working as a team with a friend was different.  We both cook daily AND teach nutrition and cooking, but have never done it together!  And did I tell you that we are both Italian decent?  (Of course we were louder than the other groups and using our hands a lot more to talk 😉 Don’t pretend you weren’t thinking it! It’s true and we are culturally proud!)  She roasted the peppers on the gas grill and I began the recipe development.  I tried three tiny batches because we had super limited ingredients to make 4 litres – every piece of pepper was worth their weight in gold!  In turn we worked pretty good together, considering we have our own style and personality.

I’m a ginger lover (yes Mr. R. Ginger can attest to that in both ways 😉 ) and my friend is not.  So that meant that I had to reduce the ginger until she was not completely disagreeing with the amounts I added.  Other than that, I reduced the sweetness of honey as well – that natural sweetener really packs a punch!  Tumeric is a very easy spice to use and it’s difficult to really add way too much.  But it does stain everything yellow – so watch your apron, tea towels, finger nails and skin!

We struggled with making 4 litres and added more onions, carrots and gooseberries to the mix at times.  We used an immersion blender to blend some of the chopped roasted peppers to make a spread consistency and left some for a chunky “edible paste” – definitely not the norm.  The other two groups used the standard corn starch thickening method to try get their product to a consistency.  Hats off to the Sweets Bakery ladies who got gooseberries as a main ingredient.  They did make it LOOK good – like a bakery product with a kind of “whipped cream” topping! 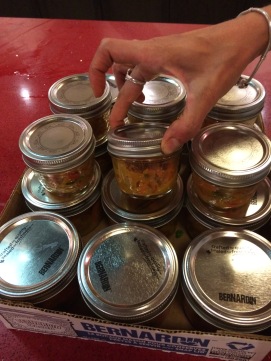 We didn’t want to change the taste so we committed to having less than 4 litres and keeping the taste better.  My idea for the product jars was to add carrot ribbons to be a part of a garnish of sorts (DYK: a “garnish” technically HAS to be edible) and make it even more visually appealing.  Topped that with parsley leaves and voila, our finished product:

We packaged them up and then found three other jars we were supposed to fill!  So we got a spoon out and started robbing Peter to pay Paul.  We made the timeline with a completed EDIBLE product!  Success!

Funny or interesting things that were part of our experience:

We had a great time doing it and all our hard work paid off:  we won the business category under my Nutrition Bites Consulting business!  We were not in attendance, but Grace made sure to hold on to our gift bags/prizes.  We received two cookbooks from the judges Jill Wilcox from Jill’s Table in London, ON and Emily Richards new cookbook coming out in the fall.  We also enjoyed Forrat’s chocolates and other kitchen stuff including an awesome heavy duty Foodland Ontario apron as well.  I’m sorry we missed out on the final event that Saturday, including Fresh Air Media’s Andrew Campbell, who is an educated young farmer in the area who is a great public speaker and media host.

The best part of the entire experience: I survived a personal and public challenge and am better for it.  And it had to do with food.  When can things ever go wrong from pushing your limits?  It definitely made me more confident in my abilities, even though deep down I know that I shouldn’t really be that hard on myself.  I learned to have faith in what I know is there, but the world might not know yet.

Hello World, I’m out of the box now and happy to face my next challenge! 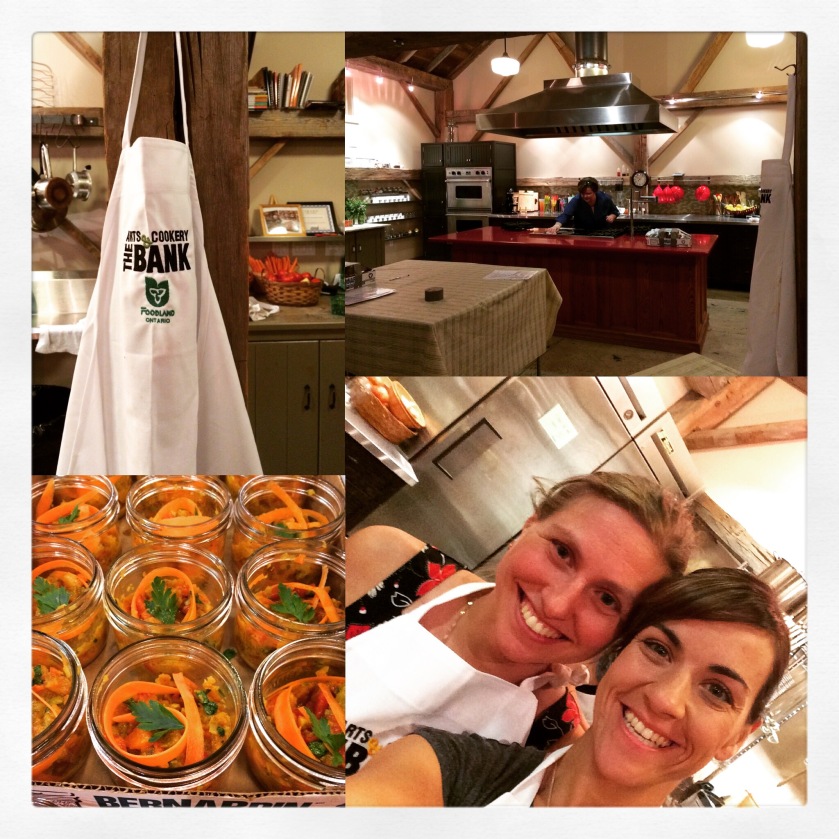 So, a previous post on The Arts & Cookery Bank in West Lorne, ON did tell of the Food Fight Challenge that I was asked to enter.  I’m proud to say that my home ec teacher friend, Tiz, and I won the business category (yes for my Nutrition Bites Consulting business).  I’ll bring you through the whole process and my experience (good and bad – always honest here!) in another post.  But I thought I’d share a picture until I have time to finish my Black Box Experience post.

Our finished product was a Honey Ginger Roasted Pepper Spread.

I believe they are planning this event to be an annual thing – so sign us up for Food Fight 2016!  We have a title to defend!